Dead Over Heels by Alison Kemper 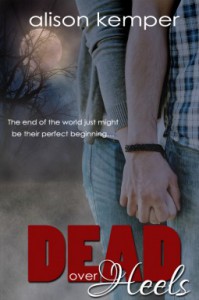 The end of the world just might be their perfect beginning…

Glenview, North Carolina. Also known―at least to sixteen-year-old Ava Pegg―as the Land of Incredibly Boring Vacations. What exactly were her parents thinking when they bought a summer home here? Then the cute-but-really-annoying boy next door shows up at her place in a panic…hollering something about flesh-eating zombies attacking the town.

At first, Ava’s certain that Cole spent a little too much time with his head in the moonshine barrel. But when someone―or something―rotted and terrifying emerges from behind the woodpile, Ava realizes this is no hooch hallucination. The undead are walking in Glenview, and they are hungry. Panicked, Ava and Cole flee into the national forest. No supplies, no weapons. Just two teenagers who don’t even like each other fighting for their lives. But that’s the funny thing about the Zombpocalypse. You never know when you’ll meet your undead end. Or when you’ll fall dead over heels for a boy…

This was an enjoyable read, it was fast paced , had lots of action but also romance. The book alternates between Ava’s and Cole’s POV, which was fairly enjoyable and well written, Never had the feeling a missing something and it was nicely balanced.

I really liked both characters both had their own strengths and were smart and a bit witty. They made a great pair to survive the journey and leaned a lot during their long days out in the wood. I thought the story and characters were well written and had a nice flow to it, but yet keeping me on the edge of the chair.

What I(personally) did not care much about were the zombies. Some things just bothered me and almost defined logic. For an example: You can stab , shoot ( not the head) them or whatever and of course it does not bother them , BUT set their hair on fire the zombie “eeeeks” and keeps trying to put it out. While I thought it was funny picturing a zombie trying put out the fire on his head, I think he/she/ it really would have not care much about it. Also the super strength, umm they are decaying and it is mentioned more than once , which would mean the muscle would also start to decay and make you weaker if anything. But ok it is SiFi and who know maybe it could happen.  Also , but this did not bother me as much as the firehead zombie , was that there were able to track them , and when I say track them I mean track them for days on scent alone.You would think it would require some brain function to track someone for days with no end in sight.

Then, lest not forget the one human they meet can control them , yeah, tells them what to do and they listen …..Umm yeah …but of course it is the one human that is bat sh&t crazy.

But overall I enjoyed their story of survival and their growing romance in the middle of a zombie apocalypse; you really never know if when you find love.

I think enjoyed this book enough and give it 3 ½ ★, I would have rated it higher if I would have cared more for the zombies in this book.

*I received a free ARC copy from the publisher via in exchange for an honest review. Thank you!