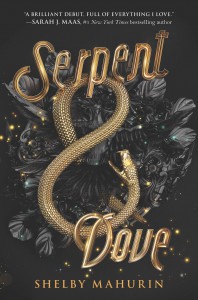 Bound as one to love, honor, or burn. Two years ago, Louise le Blanc fled her coven and took shelter in the city of Cesarine, forsaking all magic and living off whatever she could steal. There, witches like Lou are hunted. They are feared. And they are burned. Sworn to the Church as a Chasseur, Reid Diggory has lived his life by one principle: thou shalt not suffer a witch to live. His path was never meant to cross with Lou's, but a wicked stunt forces them into an impossible union—holy matrimony. The war between witches and Church is an ancient one, and Lou's most dangerous enemies bring a fate worse than fire. Unable to ignore her growing feelings, yet powerless to change what she is, a choice must be made. And love makes fools of us all.

I heard many great things about his book but I was a bit worried that is it over hyped like many books, so I went in skeptical. But I’m to report that I actually really liked it. Way more than I thought I would. I liked the snark and humor but also the twist and turns it threw at us. Some I saw coming, some and the final was a surprise to me. I loved that the roles were almost reversed here. We have, Lou who is the cocky and dirty minded one and then we have Reid, the innocent Chasseur. Which made it often really comical. Lou just knew how to get to him, and push hos buttons but once warmed up he was so much fun as well. I did enjoy the slow-burn romance between the two a lot. But I also liked the friendships in this book, between her and Coco and her and Ansel as well. We get a bit of everything in this book, snark, romance, action and being on the run all the time. Overall it was rather fast paced, some parts felt a bit slower but overall it went by way to fast. The end leaves us with a cliffhanger and I cannot believe I have to wait soo long to find out what happens next.

I rate it 4★ and looking forward to book two very much.