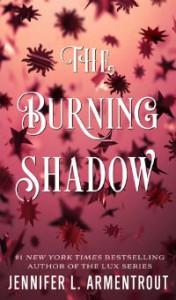 When Evelyn Dasher crossed paths with Luc, she was thrown headfirst into the world of the Lux—only to discover that she was already far more involved in their world than she ever suspected.

Because the Luxen aren’t the only ones with a hidden past. There’s a gap in Evie’s memory, lost months of her life and a lingering sense that something happened, something she can’t remember and nobody is willing to tell her. She needs to find out the truth about who she is—and who she was. But every answer she finds only brings up more questions.

Her search for the truth brings her ever closer to Luc, the Origin at the center of it all. He’s powerful, arrogant, inhumanly beautiful, extremely dangerous…and possibly in love with her. But even as Evie falls for him, she can’t help but wonder if his attraction is to her, or to the memory of a girl who no longer exists.

And all the while, a new threat looms: reports of a flu-like, fatal virus that the government insists is being spread by Luxen. A horrifying illness that changes whoever it touches, spreading panic across a country already at its breaking point

#1 New York Times, USA Today, and internationally bestselling author Jennifer L. Armentrout returns to the world of the Lux with this steamy, shocking second installment of the Origin series that will leave readers reeling.

If you have not read the first book this will contain spoilers, so be aware of that and come back once you read book one.

I certainly liked this book a bit better than the last , Evie ad Luc can still be annoying but I think because I expected it, it was not as bad.

The first half was a lot about Evie and her trying figure out who she is more like who she was and her past. She struggles quite a bit with that and what that does, it also put s a strain on the relationship or what was starting to become a relationship. But of course that is not all , while she trying to figure all that out , there is also some kind of super flu going around that is mutating and killing people what seems super fast . Everyone is trying to figure out what is happening and the public is of course blaming the Luxens and things get really dicey for them as well.

Evie grew quite a bit in this book, and became a little more bearable but she is still not my favorite, sometimes she is still pretty annoying especially when she is with Luc. While their banter is funny and cute most the times, there were a few times I rolled my eyes.  Like when they were in the most ridicules life or death situation and start their banter, really it felt off, wrong and forced at those times.

Luc I of course still like him and we even get to see some other sites of him, which made me like him even more, But he also had a few eye roll moments, mostly when with Evie . I also must admit that sometimes I have a hard time seeing Luc all grown up lol.

Of course we see some old faces and it was awesome to see them and what has become of them and made me miss them.

The book is full of action and really, the last half our poor people hardly get a break and are thrown into action nonstop. The end was amazing and while I saw some things coming, other discoveries  really blew me away and I can’t wait for the next book in the series.

The Queen of Nothing by Holly Black

Progress: 416/416pages
The Well of Ascension by Brandon Sanderson