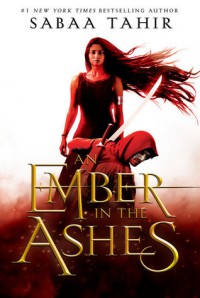 Laia is a slave. Elias is a soldier. Neither is free.

Under the Martial Empire, defiance is met with death. Those who do not vow their blood and bodies to the Emperor risk the execution of their loved ones and the destruction of all they hold dear.

It is in this brutal world, inspired by ancient Rome, that Laia lives with her grandparents and older brother. The family ekes out an existence in the Empire’s impoverished backstreets. They do not challenge the Empire. They’ve seen what happens to those who do.

But when Laia’s brother is arrested for treason, Laia is forced to make a decision. In exchange for help from rebels who promise to rescue her brother, she will risk her life to spy for them from within the Empire’s greatest military academy.

There, Laia meets Elias, the school’s finest soldier—and secretly, its most unwilling. Elias wants only to be free of the tyranny he’s being trained to enforce. He and Laia will soon realize that their destinies are intertwined—and that their choices will change the fate of the Empire itself.

I finally got to this book that been sitting on my shelf forever and I’m so happy I did.  I really enjoyed this book, it was a bit different from what I thought it be but that made it even a bit better.

I really enjoyed this setting, its dark, twisted and cruel world they live in but it was fun to follow them and see how they will survive,  if they survive.

The first half was a bit slower as far as word building and character introduction but I actually in this case really enjoyed the slower pace. It didn’t give you the feeling of too much info dumping which was nice.

The book has duel POV, Elias and Laia , but we get an even bigger view into their world from each of them . Elias the soldiers and other view and Laia the slaves and some of the resistance, both are not pretty but fun to follow each and their journeys.

I really enjoyed the characters for the most part, I liked Elias right away, but Laia took a bit getting used to not sure why. But I ended up liking her. I also liked Helene very much, there were a few I wasn’t sure about and that I didn’t trust as much, and still don’t at the end but we shall see.

The romance I wasn’t sure what we get … a love triangle, love quadrangle or what….. I had some theories but that got squashed shockingly like a bug on the windshield.

There are some pretty good plot twists some will give you whiplash, some I saw coming others really surprised me.  We also get plenty of action and some heart breaking moments.