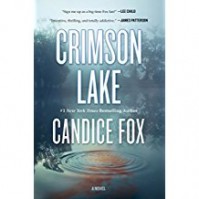 How do you move on when the world won’t let you?

12:47: Ted Conkaffey parks his car beside her

Six minutes in the wrong place at the wrong time—that’s all it took to ruin Sydney detective Ted Conkaffey’s life. Accused but not convicted of a brutal abduction,Ted is now a free man—and public enemy number one. Maintaining his innocence, he flees north to keep a low profile amidst the steamy, croc-infested wetlands of Crimson Lake.

There, Ted’s lawyer introduces him to eccentric private investigator Amanda Pharrell, herself a convicted murderer. Not entirely convinced Amanda is a cold-blooded killer, Ted agrees to help with her investigation, a case full of deception and obsession, while secretly digging into her troubled past. The residents of Crimson Lake are watching the pair's every move... and the town offers no place to hide.

*I received a free copy from the publisher via Bookish First and chose to leave a voluntary review. Thank you!*

TW: This book is about a guy accused of a crime on a minor.

I really enjoyed this book, I enjoyed it more than I thought I would.

It takes place in Australia, I never been there yet I had a great picture if it form the book, I really enjoyed the world building. It was well described but not overly, just the right amount.

The book, keeps you guessing, it gets you close and then jus leaves you with more question until the end. Something friendship and relationship wise I saw coming but the main plot and “who done it”, I did not see coming as much if at all. I thought about it a couple times but then was like “nahhhh” but that is just part of how the story plays with you.

One of my favorite parts of the book were the “Dear Jake” letters, creepy and fun to read.

Characters, I liked them and I liked the mix of a bit of everything. From nice to bad and the weird and everything in between.

I liked Ted…. I think …..for the most part I liked him but there were a few definite moments and actions I was really  weirded-out by him and not sure what to think of him , But I think that was meant to be by the author.

I really liked Amanda, even with all her quirks … maybe even more so.  She also brought a bit of humor into the story.

Fabina….. I’m honestly not sure about her … maybe we see more if her next book.

I liked how everything came together at the end, and how other things left a bit open for the next book.

I for one, am really looking forward to read book two.