Review: Iron and Magic (The Iron Covenant #1) by Ilona Andrews 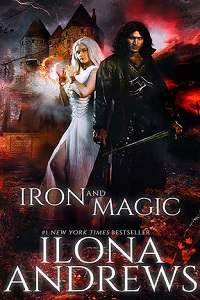 No day is ordinary in a world where Technology and Magic compete for supremacy…But no matter which force is winning, in the apocalypse, a sword will always work. Hugh d’Ambray, Preceptor of the Iron Dogs, Warlord of the Builder of Towers, served only one man. Now his immortal, nearly omnipotent master has cast him aside. Hugh is a shadow of the warrior he was, but when he learns that the Iron Dogs, soldiers who would follow him anywhere, are being hunted down and murdered, he must make a choice: to fade away or to be the leader he was born to be. Hugh knows he must carve a new place for himself and his people, but they have no money, no shelter, and no food, and the necromancers are coming. Fast. Elara Harper is a creature who should not exist. Her enemies call her Abomination; her people call her White Lady. Tasked with their protection, she's trapped between the magical heavyweights about to collide and plunge the state of Kentucky into a war that humans have no power to stop. Desperate to shield her people and their simple way of life, she would accept help from the devil himself—and Hugh d’Ambray might qualify. Hugh needs a base, Elara needs soldiers. Both are infamous for betraying their allies, so how can they create a believable alliance to meet the challenge of their enemies? As the prophet says: “It is better to marry than to burn.” Hugh and Elara may do both.

I love the Ilona Andrews team and I love the Kate Daniels series but to be honest when I heard about this book first and Hugh being a “good” guy I was not convinced. That being said…… I should admit that I was wrong and I really, really loved it. I don’t know how they do it (and maybe it is magic), but they just a have a way to suck you into their world and make you love it. This book is a sort of add on to the Kate Daniels series/ world but even if you have not read the Kate Daniels books, you can read it. But of course it helps to know the world and some characters from that world, plus they super fun to read. When we first meet Hugh in this book he is pretty much broken and has given up on life. The only thing that keeps him going are his men, if even that. He is just a shell of a man we know and hated so much. He makes a deal to marry Elara for the alliance they offer each other in hope of defeating a common enemy. I never thought I would like him or could easily relate to him but damn it he is one charming bastard with a wicked and pretty sad past. Things to get to him but he just never really showed it. The more we learn about him and his way the more I liked him. Didn’t help that he is pretty sexy and he knew it , but most if all I liked his snark. Best coupled up with Elara . Speaking of Elara, I really loved her form the beginning, she didn’t legt Hugh get the better of her and stood her ground…. For the most part. She matched him in a lot of things. We learn pretty early on that there is more to her and she also is kind of haunted by something in her past and she feels cursed. Her true powers are sort of a big mystery… all the way to the end when we get what I think a pretty good glimpse of her and her coven. I really enjoyed the snark between Hugh and Elara and I laughed out loud many times. Of course they have some wicked chemistry together that will drive you crazy. This book is crazy fun and full of action, humor and surprises. Of course we get some smexy times like in most of their books. Some things were not a huge surprise to me since I stupidly read Magic Triumphs first but I still loved it and it still had some pretty big twists. Overal super fun book and I can’t wait for the next one.