Review:The Sea of Monsters (Percy Jackson and the Olympians #2) by Rick Riordan 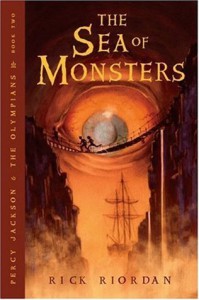 The heroic son of Poseidon makes an action-packed comeback in the second must-read installment of Rick Riordan's amazing young readers series. Starring Percy Jackson, a "half blood" whose mother is human and whose father is the God of the Sea, Riordan's series combines cliffhanger adventure and Greek mythology lessons that results in true page-turners that get better with each installment. In this episode, The Sea of Monsters, Percy sets out to retrieve the Golden Fleece before his summer camp is destroyed, surpassing the first book's drama and setting the stage for more thrills to come

Another great, light, funny and quick read with our friend Percy and his friend.
Like the first book I really enjoyed this book. Percy again grows a lot in thus book. Now that he is more familiar with the gods, camp half-blood and such things come easier for him. Well most the time. Other times he still is sometimes walking around with his blinders on lol. He is back with the gang and camp half-blood and its people are once again in trouble and it is up to Percy and crew to safe it.
We meet some new people and even come across, face to face with some of the gods, Some unlikely people become allies and others not so much . I really enjoyed some of the new people we meet and what they brought to the story good or bad ort sometimes just awkwardly funny.
Overall I really enjoyed this light and fun adventure and look forward to the next book in this so far awesome series that the whole family can enjoy. Young or old or just somewhere in the middle ;)
I rate it 5 ★