The Drafter (The Peri Reed Chronicles #1) by Kim Harrison 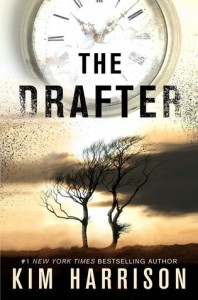 Detroit 2030. Double-crossed by the person she loved and betrayed by the covert government organization that trained her to use her body as a weapon, Peri Reed is a renegade on the run.

Don’t forgive and never forget has always been Peri’s creed. But her day job makes it difficult: she is a drafter, possessed of a rare, invaluable skill for altering time, yet destined to forget both the history she changed and the history she rewrote.

When Peri discovers her name on a list of corrupt operatives, she realizes that her own life has been manipulated by the agency. She joins forces with a mysterious rogue soldier in a deadly race to piece together the truth about her final task, unable to trust even herself.

Being a big Kim Harrison fan I was excited to get to start on her new series after “The Hollows Series” ended.

I must say the beginning was a little confusing, we get thrown right into Peri’s world and that is a little different than ours, with the drafters and anchors. Plus learning all the characters on who is who and does what. But I got the hang of it pretty fast. Though there were still times throughout the book it got a little hard to keep up and confusing (to me).

Who is Peri? We know she is a drafter (a person that can shift time) and she is super strong and wont let much bother her. She can kick ass. She is witty and snarky. She is smart.

She has an anchor ( a person that restores lost memories) who is also her lover,  she has a mother who might or might not have been a drafter ?! That is about all we learn from Peri in this first book. We don’t learn much about her but maybe that is because she is not sure who or what she is anymore as the books goes on. Peri is also the most lied to woman I have read about in a long time. She can’t trust anybody but the bad thing is, half the time she forgets it. I really felt for Peri and really was rooting for her.

We also have Silas, Jack, Bill, Howard and Taf and her mother. All of those people are major players in this book but you never know who to trust and who to shoot.  But I don’t want to accidently spoil something about any of them so I won’t say much about either of them. Except Taf, I love her for some reason, even if we do or do not know if we can trust her.

This book was defiantly a world builder, we get to know a lot more about their world than the characters. Sometime it seemed a bit much and I would have loved to learn more about the characters and Peri, herself. I’m really hoping for more character development in the next book, like with most of her books.

Overall, I liked the book, it had suspense, action, some really good twists (even though I saw some coming), and some humor but not as much. This book was a bit darker compared to other books she has written.  It was not my favorite book she ever written but by far not the worst. I thought the last few chapters were the best and things got finally rolling.

It does have a wicked cliffhanger and makes me want to read book two.

I really want to know where this series is heading and will defiantly read book two.

My rating isn’t the best, just because I wished we had more of Peri and learn more and little to much world building for me in this book. But that might be different for everyone and most people might love it.