Dying for a Living (Jesse Sullivan #1) by Kory M. Shrum 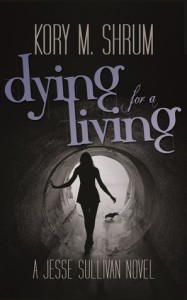 On the morning before her 67th death, it is business as usual for Jesse Sullivan: meet with the mortician, counsel soon-to-be-dead clients, and have coffee while reading the latest regeneration theory. Jesse dies for a living, literally. As a Necronite, she is one of the population’s rare 2% who can serve as a death replacement agent, dying so others don’t have to. Although each death is different, the result is the same: a life is saved, and Jesse resurrects days later with sore muscles, new scars, and another hole in her memory.

But when Jesse is murdered and becomes the sole suspect in a federal investigation, more than her freedom and sanity are at stake. She must catch the killer herself—or die trying.

I learned about this book from a good friend and it sounded rather unique, so I decided to give it a try. And it was a pretty unique concept. This is so not your traditional zombie book and it was kind of refreshing. While I love “eat your face off” zombie books, this was great in completely different way. Jesse is a Necronite (zombie) who can die over and over again and be fine, for a time anyways. She can take place of someone that is dying (except Illnesses) and die instead for them. To predict their deaths “mediums” are used. Of course with that come haters, mainly the church is really against it and goes to good length to try to prevent that from happening. With that we get pretty good action and nasty people being nasty and killing others and necronites. Anyways, I really enjoyed this book and characters a lot, it was unique, characters were likeable and easy to follow. Well most of the times. It sure kept me tied to the book and was hard to put down. It was funny, suspenseful, lots of twist and turns and also plenty of action. Romance is also a factor, though I was a bit confused with this part. I think it has a lot to do with that Jesse herself is a bit confused when it comes to love and or who to love. Overall Jesse can be a bit confusing, she is an odd ball for sure, from mixed matched shoes to weird other really weird things it is never really clear what she will do next. I think that was part of the book, maybe. That maybe she has “died’ to many times or so. No idea and I hope that will be better explained in future books. I also would have liked to know more about how necronites work. Are they dead, dead or do they comes back to live?! They seem to be eating and drinking normal foods but on the other hand they have rigor mortis to deal with for a while and such. So that I would have liked to be explained a bit better and more detail. Speaking of details, sometimes things are a bit over described and went a bit too much in, but not to the point that is didn’t want to read it more. Another thing was that there were a lot of typos and grammar errors in the e-book I got from amazon and I think that could use a newer version with those things fixed. Overall, I thought it was a good and interesting book and I will read future books to see what will happen next. I rate this book at 3 ★