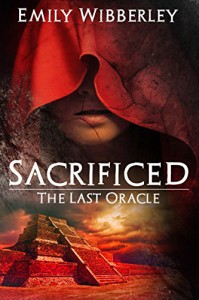 Fifteen-year-old Clio should have never been the Oracle of Sheehan. That power is passed from mother to eldest daughter, and Clio is the youngest of four sisters. But when her entire family is murdered by Mannix, the king’s adviser, Clio is left all alone and heir to a power she never wanted and doesn’t understand.

Hunted by Mannix, Clio seeks refuge in a foreign city where oracles are absolutely forbidden. If she’s found out, she will be sacrificed atop its great pyramid.

Clio has no choice but to win the trust of Riece, an enemy warrior. Despite the growing feelings between them, Clio knows that if he finds out who she really is, he won’t hesitate to kill her.

Clio tries to hide her budding powers, but the visions she has of Mannix bringing a barbarian army into Sheehan torture her conscience. She alone has the strength and foresight to stop him, but only if she can embrace her destiny and sacrifice everything.

This book was not what I expected; it was much darker than I thought it would. But it was a great book.

While it was heartbreaking it also was beautiful to follow Clio on her journey after she becomes the one thing she always hated, the Oracle. On her journey she meets a few people that help her get through and never give up hope even though she can’t safe everyone. A lot of lives are lost and a lot of blood is spilled but through it all but Clio never really gives up. She fights to the end for what she believes for the ones she loves.