The Witch With No Name (The Hollows #13) by Kim Harrison 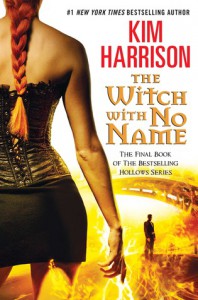 Rachel Morgan's come a long way from the clutzy runner of Dead Witch Walking. She's faced vampires and werewolves, banshees, witches, and soul-eating demons. She's crossed worlds, channeled gods, and accepted her place as a day-walking demon. She's lost friends and lovers and family, and an old enemy has become something much more.

But power demands responsibility, and world-changers must always pay a price. That time is now.

To save Ivy's soul and the rest of the living vampires, to keep the demonic ever after and our own world from destruction, Rachel Morgan will risk everything.

I always find it hard to review a last book in a series without spoiling it or reviewing the entire series. So I will make this fairly short without any spoilers.

First off, I must say this was an amazing book and a great ending to this great series. It had plenty of the action we used to but is nicely balanced with humor and romance. It was a pretty fast paced and had lots of things going on.

We had the Vampires who were trying to get Rachel to safe their souls, the elves after the vampires and the demons. And Rachel of course stuck in the middle of it all in her true Rachel fashion. But she was not alone and had Trent by her side pretty much throughout the book, which I loved. I loved the relationship and trust they have built and it’s hard to believe how much they disliked each other. Both have come such a long way and grown so much on their own but together they are almost unstoppable. Though Rachel still had her doubts about their relationship in this book.

We see a few other familiar faces returning for the final book, which was great. But I was super happy to see Al being in the book and how it all turned out. I wasn’t sure about him or his story after the last book.

Also Rachel’s relationship to Ivy and how much she would do for Ivy was great. Even though I was never really a big fan of Ivy or Nina I was satisfied for them at the end even to it was not the best scenario for them but everyone made it the best out of it.

The last chapter was just EPIC, it was bittersweet, seeing those characters for a last time but oh so great to see everyone who made it , get their HEA in a way.

Overall, this book was fantastic and I give it full 5 ★ and I hope whatever Kim Harrison pulls out of her hat next will be just as great.

It was a great ride through this series, farewell hallows you were great and will be missed.

“Thank God Jonathan had been there? Never thought I’d think that.”

“ Well, this is about as comfortable as finding a naked fairy in your eldest son’s bedroom”

“ My God, the man might be a business tycoon, but his heart was that of a warlord elf”

“Cormel is still trying to figure out how you two escaped.” Trent leaned over the table, eyes dancing. “Her magic carpet, of course.” I’m not a rug,” Al said

“You were to be the beginning of us anew, with all the best parts and none if the bad”