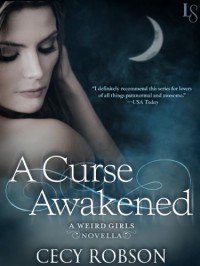 Celia Wird shouldn’t possess the ability to transform into a tigress. Her three sisters should never be able to burst into flames, heal wounds, or transform common objects into deadly weapons. And yet they do.
Before they were born, the Wird Sisters were cursed by a spell that was intended to destroy them, not endow them with extraordinary powers. The sisters’ magic is untamed and explosive at best, and time is running out for them to take command.
Vampires have targeted Celia’s sweet, tragically human ex-boyfriend Danny. The sisters rush to his aid, but in order to take down the vamps, first they must face their dark past and break a spell that’s screwing up their powers. Except this curse wasn’t meant to be broken . . . and the witch who cast it isn’t done toying with them yet.

This was a fun little read.

Being a novella it was pretty short but that does not mean it was any bad. It was jam packed with action, humor and some pretty gross scenes.

I liked all the characters; they were funny and yet scary at the same time.

I was surprised by some things that happened and I did not see them coming.

* received as a free arc copy from the publisher via Netgalley in exchange for an honest review. Thank you!