Review: A Curse So Dark and Lonely (Cursebreakers #1) by Brigid Kemmerer 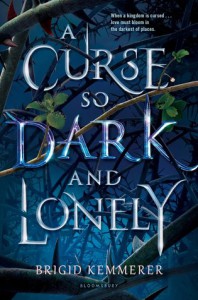 In a lush, contemporary fantasy retelling of Beauty and the Beast, Brigid Kemmerer gives readers another compulsively readable romance perfect for fans of Marissa Meyer.

Fall in love, break the curse.

It once seemed so easy to Prince Rhen, the heir to Emberfall. Cursed by a powerful enchantress to repeat the autumn of his eighteenth year over and over, he knew he could be saved if a girl fell for him. But that was before he learned that at the end of each autumn, he would turn into a vicious beast hell-bent on destruction. That was before he destroyed his castle, his family, and every last shred of hope.

Nothing has ever been easy for Harper Lacy. With her father long gone, her mother dying, and her brother barely holding their family together while constantly underestimating her because of her cerebral palsy, she learned to be tough enough to survive. But when she tries to save someone else on the streets of Washington, DC, she's instead somehow sucked into Rhen's cursed world.

Break the curse, save the kingdom.

A prince? A monster? A curse? Harper doesn't know where she is or what to believe. But as she spends time with Rhen in this enchanted land, she begins to understand what's at stake. And as Rhen realizes Harper is not just another girl to charm, his hope comes flooding back. But powerful forces are standing against Emberfall . . . and it will take more than a broken curse to save Harper, Rhen, and his people from utter ruin.

This book was soo much fun. I read a couple retellings of “Beauty and the Beast”, but this is one of my favorites.  Same concept and lore as the original , yet new, modern, fresh with new twists and new awesome characters.

I loved the mixture of our modern world and the fantasy world. She has done a wonderful job combing these two.

Harper, I loved her even with her disability she never backed down, she never gave up and she fought for what is right to her. She was smart and funny and always tried to take everyone into account . She also thought all her stuff through before she acted…. Well for the most part anyway.

Rhen our poor tortured prince, it was clear early on that he is not all that selfish and arrogant. He cares much and deeply for his people and willing to pay any prize in order to save everyone.

Grey I think he was one of my favorites, even over Rhen , I loved him and his honesty and loyalty not only to his kingdom but most of all friends. I loved most the friendship he had with Harper.

Overall, awesome read and the ending had me begging for more. I cannot wait to get my hands on the second book.