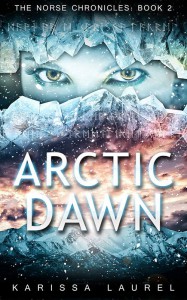 Alone and exhausted after her month-long sojourn as a shooting star, Solina Mundy flees to southern California to lie low, recuperate, and plot a survival strategy. The one person she trusts to watch her back is her best friend, Skyla Ramirez. But Skyla has been missing for weeks.

The arrival of a dangerous stranger and the discovery of a legendary weapon of mass destruction forces Solina out of hiding and back into the fight for her life. Solina knows she won’t last long on her own. She must find out what happened to Skyla and unite her contentious allies if she hopes to track down this devastating weapon before her enemies use it to burn the world to ash.

Finally the second book in The Norse Chronicles is out and I could not wait to get my hands on it. I loved the first book in the series that left us with a huge cliffhanger, But I think I like the second book even better. Ms. Laurel done it again, written a book with the prefect mix of action, suspense, humor and a touch of romance. I love her twist in Norse mythology and how well all of her Character fit in it and just make it their own. I just love her story, her characters and how nicely it all came together. I also love, that while we have Solina as a main character and her story, other side characters and their story or as things unfold are just as important as Solina’s. I love Solina she is super smart and thinks stuff through and not just when it comes to battles. No, also her (kind of non-existing) love life. She not just falls head over heels for the guy and forgets herself or the bigger picture in life. But at the same time that can also be a little frustrating, because there is obviously some pretty chemistry between them. There is a hint of a triangle but then again not really. That part is a little hard to explain without spoiling it, so I will just leave it at that. There are some pretty good twist in this book and some new things come to light about Solina and the people surrounding here and of course not all are good. The end had kind of had a sixth sense effect for me. Once I saw it and thought about it all made sense and there were little subtle hints throughout the book leading up to this shocking conclusion. Of course we are left again we a cliffhanger and have to wait what seems to be an eternity for the next book in the series and if I could I would already pre-order the next book. Overall, another wicked awesome book in the series that I had a hard time putting down. I rate it 4 ½ ★

*I received a free copy from the author in exchange for an honest review. Thank you!